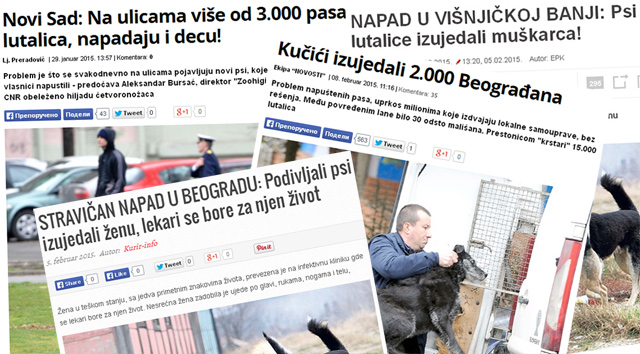 In occasion of agitating articles on abandoned dogs, that appeared in Serbian media at the beginning of February, societies Hope For Animals – Riska, Link Plus and Feniks have sent an announcement to media, by which they are calling upon professional and ethical reporting, asking them not to spread panic and not to disturb the public. We are addressing you about noticeable interest of media on reporting on abandoned animals problem, and in light of recent events on which we are informed about via printed and electronic media. We are reminding you that Article 5th of Public Information and Media Law (Sl. glasnik RS, 83/2014), which relates to the information about questions of public interest, states that everyone has a right to be truthfully, completely and timely informed about questions of public interest. We are pointing out that the act of informing cannot be considered separately from education of the public and forming the attitudes of the public in relation to the investigated phenomenon. Codex of Journalists of Serbia has clear directions on achieve accuracy and objectivity in reporting, and differing facts and comments, assumptions and attitudes. As you know yourself, even the same facts in different contexts could lead to different conclusions.

Our Societies have addressed NUNS and UNS about the problem of inaccurate and sensationalistic reporting of several media on 5th of February, about the case that happened in Višnjička banja (Belgrade) of the so-called attack of abandoned dogs. The publishers have modified different versions of the same news on that day, which speaks for itself about the unthoughtful and unlawful practice. That raises a questions about the real role of the media, and their social responsibility. If the media continue to practice sensational, biased, and tendentious representation of human-animal relations, which boomerangs as an abandoned animal problem, instead of efficient and humane solutions, we will have more cases like that of a brutal axe-murder of a four-month-old puppy, by the owner's neighbor (published on February 7th, 2015).

The deep roots of bad reporting practice can be sensed in the most recent article on the subject („Dogs bitten 2000 Belgraders, Novosti newspaper, 8th of February 2015).

Our idea is not to forbid the reporting on homeless animals problem and it's consequences to animals, people, and society as a whole. However, what is the goal? The solution to the problem, or prolonging of manipulation, which goes in lines of „dogs are ravaging horrible beasts, a death threat to citizens of Serbia, the enemy which should be extinct, because our cities are besieged by these terrible creatures“. Above all, media should report on this problem in the context of education, pointing out the cause, and that is irresponsible ownership, abandonment and uncontrolled reproduction of animals in illegal kennels. Also, they should point out the abuse and situational factors in which dangerous man-animal situations occur. When it comes to dog attacks, it is reasonable to expect that the media will indirectly provoke and magnify fear, which will then lead to more unsafe behaviors of citizens towards the animals. Also, the media has great role in the enhancement of hate and brutal violence towards animals.

The last, but not least, the media should constantly educate the public about the ways of solving this problem, and not telling that the current measures are not effective without checking how are the measures being conduced, or if they are conduced at all.

In accordance with stated above, we call the media companies to be socially responsible, to respect  the Law and the Codex on subject of reporting on abandoned animals.